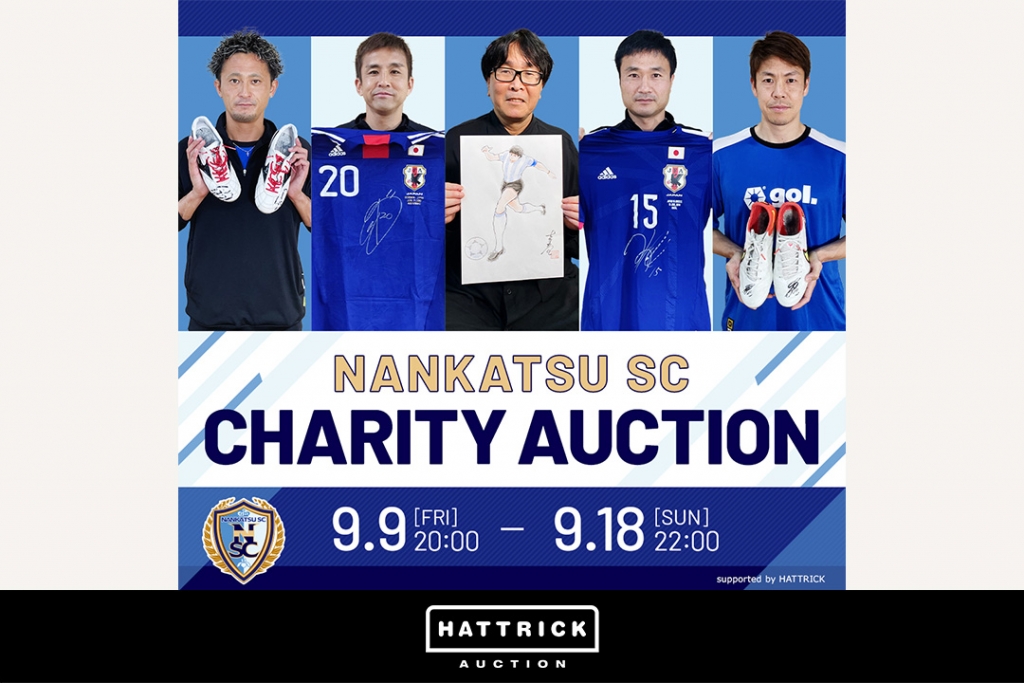 Nankatsu SC is a football club featuring the same name as the team of Tsubasa Ozora, the main character in the football manga, Captain Tsubasa. The club is owned and represented by Yoichi Takahashi, the author of the world-famous Captain Tsubasa, pursuing the stated vision, From Katsushika to the J-LEAGUE. Playing in the Kanto Soccer League Division 1, the club has embraced Katsushika Ward and the entire Tokyo metropolitan area is its home town as the team seeks promotion to J-LEAGUE status. Like Captain Tsubasa, Nankatsu SC aims to be a team loved by fans across Japan and the world, giving dreams and hopes to many children, sharing hope and pride with fans and supporters, and contributing to the development of society.
The Nankatsu SC Charity Auction is a project that expresses the team’s gratitude to stakeholders involved with Nankatsu SC, including the local Katsushika Ward community who have always given their enthusiastic support to the team. An original illustration of Diego Maradona, specially drawn and signed by Yoichi Takahashi, will be one of the items auctioned. In addition, former Japan national team and World Cup players Junichi Inamoto and Yasuyuki Konno, who joined Nankatsu SC in the 2022 season, and Kunimitsu Sekiguchi and Masahiko Inoha, who played in Japan’s top J-LEAGUE, will be auctioning personally autographed uniforms and shoes used by the players in the past.
The proceeds from this project will be used for participation fees in the MY FOOTBALL project operated by Molten Corporation. The assembly style football balls purchased will be used in stadium events for Katsushika Ward children during official home games next season, as well as in projects that include player visits to children’s homes in Katsushika Ward to assemble football balls together. In conjunction with this project, a video featuring interviews with Yoichi Takahashi and the four Nankatsu SC players has been posted to the official HATTRICK YouTube channel (URL:https://youtu.be/0Tam192wLpE). The players discuss why they joined Nankatsu SC and their enthusiastic participation in the vision to gain promotion to the JFL.

HATTRICK is a sports team-approved auction service operated by Valuence Japan Inc., pursuing a mission to create a sustainable future for athletes. This new auction service protects the intellectual property of athletes and teams, co-creating new value by connecting with fans and support all people engaged in sports.
・HP：https://auction.hattrick.world/?locale=en
・Instagram：https://www.instagram.com/hattrick.world_official/（@hattrick.world_official）
・Twitter：https://twitter.com/hattrick_world（@hattrick_world）