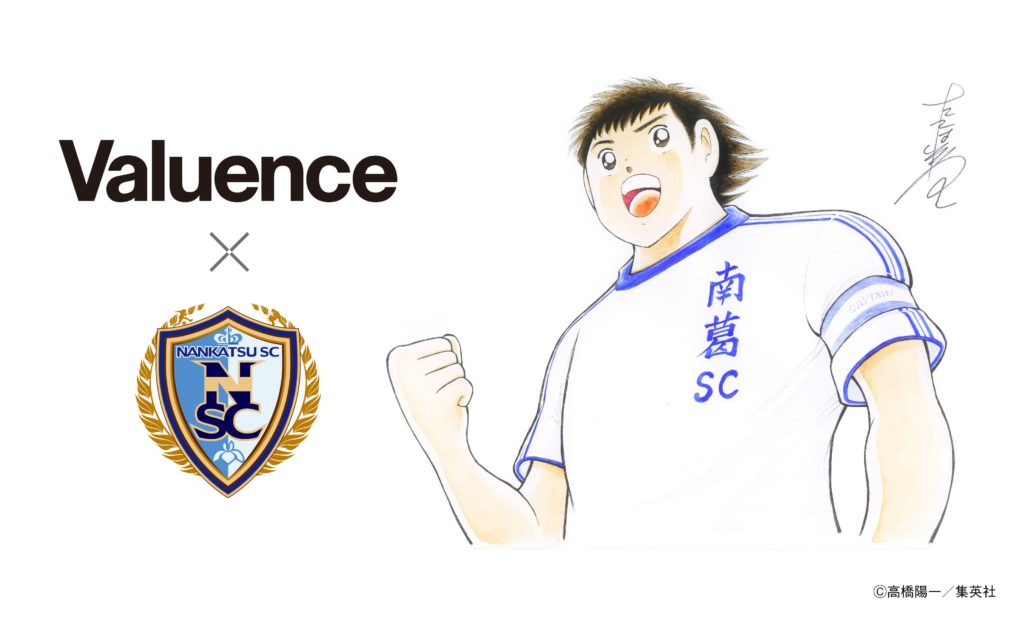 The Valuence Group offers life-changing value tailored to all our stakeholders, encouraging every person in the world to live true to yourself. Valuence Holdings Inc. (Tokyo; Shinsuke Sakimoto, representative director) has signed a sponsorship contract as of March 2021 with Nankatsu SC Co., Ltd. (Tokyo; Representative Director: Yoichi Takahashi), operator of the Nankatsu SC soccer club. As part of our partnership, the Valuence logo will be featured on Nankatsu SC uniforms when the soccer club’s new season begins in April 2021.​

Supporting Nankatsu SC as They Fight to Join the J-League​​​​​​

Nankatsu SC is a club team in the Kantō Soccer League. The team is working to contribute to the revitalization of its home of Katsushika Ward in Tokyo alongside residents, government agencies, and sponsor companies, and it is aiming to enter the highest league in Japan, the J-League. The club’s representative is Yoichi Takahashi, author of the world-famous and long-beloved Captain Tsubasa soccer manga series.​

The Nankatsu SC team and its players are loved by many, much like the original Captain Tsubasa work. Valuence has entered into partnership with the club because it shares its desire to bring dreams and hopes to children and to make that club the first from Tokyo’s 23 wards to enter the J-League. Valuence’s logo will not only be featured on Nankatsu SC uniforms, but Valuence will also be able to use the Captain Tsubasa character in its public relations and other messaging, bolstering its overseas approach.​


Seeking to realize the Valuence Group’s Mission: “Encouraging people to live true to themselves”​

The Valuence Group supports dual-career hiring for athletes (https://www.valuence.inc/athlete/, Japanese only), giving them an opportunity to live their dream of playing sports while working at the Valuence Group, and helping them build a career after retirement from sports. Valuence Group athlete employees, such as soccer players and K-1 fighters, compete in a variety of arenas, pursuing and embodying a life true to themselves. They are able to pursue both sports and career while working at the Valuence Group, and some are even players for Nankatsu SC, our new partner (https://thedigestweb.com/topics_detail13/id=36136 [news article, Japanese only]).​

Our new partnership with Nankatsu SC is also a step toward realizing the Valuence Group’s Mission: “Encouraging people to live true to themselves” Going forward, we will take our cooperation with the team to the next level, promoting our current dual-career hiring and fostering future generations and contributing to local communities as a result. We will continue to strive for these with our eyes on the future goal of creating a world where everyone can live true to themselves.​